Site-directed mutagenesis techniques have relied primarily on PCR and standard cloning methods. Read about some of the common cloning methods used for mutagenesis and how double-stranded DNA fragments (gBlocks Gene Fragments) can save you both time and money.

In vitro site-directed mutagenesis is a core technique in functional genomics studies. Until recently, labs performing site-directed mutagenesis relied primarily on PCR and standard cloning methods. When PCR is used, the primers are designed to include the desired change, which might be a base substitution, addition, or deletion (Figure 1). During amplification, the mutation is incorporated into the amplicon, altering the original sequence. 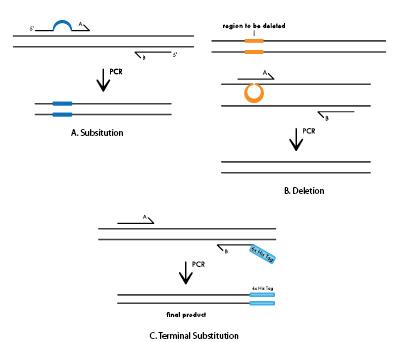 Figure 1. Examples of site-directed mutagenesis by traditional PCR. Primers incorporating the desired base changes are used in PCR. As the primers are extended, the mutation is created in the resulting amplicon. Here, examples of (A) substitution, (B) deletion, and (C) terminal substitution are shown.

Introducing mutations with long primers through PCR works for many applications, but it also has limitations. One of these is that the size of the mutation is constrained by the maximum length of the DNA oligonucleotide used. And as oligo length increases, the percentage of full-length product decreases, resulting in less efficient PCR and a lower percentage of the desired construct (See the article, Getting enough full-length oligo? Coupling efficiency matters!). To address these issues, IDT offers high quality Ultramer® Oligonucleotides up to 200 bases. These long oligos are synthesized using a proprietary coupling process, enabling IDT to provide the highest percentage of full-length product in the industry.

Ultramer Oligonucleotides are the best option for long mutagenesis oligos due to their quality, and high coupling efficiency. However, some of the available 200 base sequence must be complementary to the original sequence, which still limits the maximum possible sequence insertion length to <200 bases. Furthermore, if you want to alter the sequence at more than one site (e.g., changing several codons at one site, and adding a protein tag to the resulting mutant), you will need to perform multiple rounds of mutagenesis, and the cost of reagents and time will rise accordingly. Other challenges for use of long oligos include that they do not perform efficiently in applications involving high GC content or secondary structure, and very long oligos are more expensive per base than recently developed alternatives.

Arguably, the most significant improvement to mutagenesis methods is the commercial availability of long, synthetic, double-stranded (ds), custom DNA fragments. IDT provides them as gBlocks® Gene Fragments (see the Product Focus section below). Up to 3 kb dsDNAs can be obtained with the desired mutations designed directly into the sequences. They are compatible with both existing methods (e.g., PCR, and restriction cloning), and new methods (e.g., isothermal assembly) of mutagenesis, and are becoming a standard reagent in these techniques because they eliminate some of the time-consuming steps needed to produce both a wild-type sequence and any derivative variants. Now, for a reasonable cost, researchers can design all the requisite sequences for their experiments, order them online, and receive them ready for direct use or cloning. Moreover, final constructs can be easily generated even when a physical starting template is not available.

PCR and restriction-free assembly of dsDNA

As was mentioned above, dsDNA gene fragments are compatible with familiar PCR mutagenesis methods, but they also offer some interesting advantages. An example of the direct application of dsDNA to PCR mutagenesis is the restriction-free (RF) cloning method described by Unger T, et al. (2010). In the RF method, PCR primers are replaced with long dsDNA that has 5’ ends containing homologous overlaps with the desired vector insertion site (Figure 2). The plasmid does not need to be linearized and the insert can be designed to integrate anywhere along the vector sequence. In addition, bacterial copied plasmids are methylated while PCR amplified plasmids are not. Following the procedure, methylated empty vectors can be removed with DpnI treatment [1]. A protocol for this method can be found at www.idtdna.com/gBlocks, under the Support tab.

Figure 2. Restriction-free cloning allows sequence insertion into a circular vector. A gBlocks Gene Fragment or PCR product is designed with 30–80 bp overlap at the 3′ and 5′ ends and the vector insertion site (A and B). Using the RF protocol, the fragment is incorporated by PCR and a high-fidelity polymerase. The resulting plasmid contains the cloned gene (G) with a nick on each strand that is sealed by endogenous E. coli mechanisms [1].

Whether you are using synthetic PCR primers or dsDNA for mutagenesis, you are relying on the incorporation of those sequences into your final construct. Another benefit of using dsDNA fragments is that substantial amounts of new DNA can be added, allowing incorporation of new genes, regulators, tags, etc. In fact, a synthetic DNA sequence is often long enough to include the desired mutation or deletion as well as the rest of the wild type sequence. This means that sequential mutagenesis procedures are eliminated, or greatly reduced, and the parts of your gene that you do not want to change will not be affected by polymerase errors, as can occur in methods that rely on oligonucleotide primers and long PCR methods. For any mutagenesis procedure, it is still prudent to screen a few colonies by sequencing to confirm the final sequence is what was intended.

The RF cloning method is only one example of PCR based methods being used with synthetic dsDNA fragments. In the article, Cloning Strategies Part 1: Assembly PCR for novel gene synthesis, we describe PCR assembly, and show how dsDNA and amplification primers can be combined to produce synthetic sequences.

TECHNICAL TIP: In all cases, error rates from the PCR process can be reduced by careful enzyme selection, using as few amplification cycles as possible, and limiting the length of the amplicon.

Isothermal assembly methods make it fairly easy to make seamless changes to gene sequences. Isothermal mechanisms assemble pieces of linearized DNA—typically, a plasmid and one or more inserts—with overlapping homologous ends by first modifying the DNA and then joining the fragments [2]. Typically, the fragments are mixed together in the reaction, and overhanging ends are created by an enzyme with endonuclease activity. The resulting “sticky” ends then anneal to the complementary fragments, which determines the precise position and directionality of each piece in the finished construct. A polymerase then fills in the gaps, and a ligase seals the nicks (Figure 3). 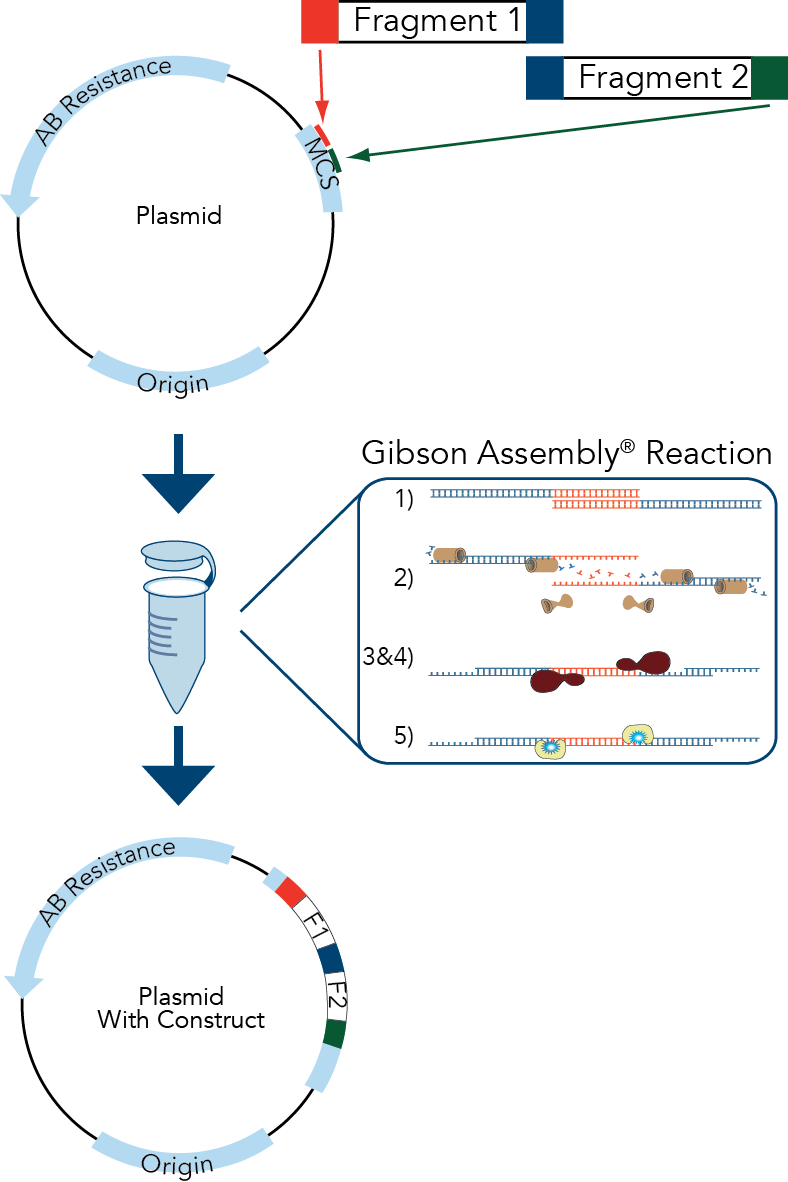 Figure 3. A Gibson Assembly® reaction combines 2 gBlocks® Gene Fragments and a linearized plasmid. Linear DNA fragments, including plasmid are designed with 20–80 bases of homologous overlapping sequence. (A) DNA fragments with overlapping ends are combined in a 50°C, 1 hr reaction. (B & C) Exonucleases digest the 5′ DNA ends, and are rapidly inactivated by the 50˚C reaction temperature; (D & E) Complementary overhangs anneal, and a high-fidelity polymerases fill in any gaps. (F) In the final step, a ligase covalently joins DNA fragments to the plasmid [2].

For isothermal assembly, the plasmid can be linearized by restriction digest or PCR, giving you the freedom to insert your sequence at any location regardless of the presence of restriction sites. However, a benefit of using PCR to linearize you vector is that any circularized plasmids can be removed by DpnI digest, reducing the presence of empty vectors when screening clones for finished sequences.

Often labs need more than one version of a particular construct. When only a few variants are required, it can save significant time and resources to order all of the variants as standard gBlocks Gene Fragments. However, for mutagenesis applications where you need to test many different amino acid combinations (e.g., antibody research, binding affinity studies, and enzyme kinetic studies) variable bases can be included in the gBlocks Gene Fragment sequence to create a diverse pool of sequences (gBlocks Gene Fragments Libraries).

Variable bases can be used to study structural DNA elements like promoters and enhancers, and are commonly used to create NNK libraries of amino acid codon variants. In NNK libraries, N represents DNA bases A, G, C, T, and K represents bases G and T. By using the NNK variable string in your sequence design, you can make a random library with 32 of the 64 codons, and simultaneously eliminate 2 of the 3 stop codons. The NNK codons cover all of the standard amino acids; limiting to 32 codons makes it easier to screen your finished library. Until recently, the creation of mixed base libraries had to be accomplished by synthesis and then pooling of separate oligonucleotides. However, unlike other synthetic dsDNA products, gBlocks Gene Fragments can also be designed to contain regions of variable bases.

Currently, the online ordering tool allows you to incorporate up to 18 sequential N or K bases, generating libraries with >1 billion variants. However, other custom designs that are not supported by the automated, online ordering system may still be feasible by contacting the experts using the IDT Help Request Form.

When does it make sense to use oligonucleotides?

When planning your mutagenesis experiments, consider the following 3 factors to help you determine the best protocol and reagents for your purposes:

When selecting appropriate methods and materials, the size and number of proposed changes are important factors. Using high-fidelity oligos and mutagenesis reagents instead of the dsDNA fragments described above is still a viable method when the gene of interest is already cloned, and the desired mutation is relatively short. For example, high quality Ultramer Oligonucleotides of up to 200 bp can be used to make changes of 100 bp or more. However, the efficiency of the mutagenesis reaction will decrease as the size of the change increases, and the cost of a 200 base Ultramer Oligo is more than the cost of a 500 bp gBlocks Gene Fragment.

Researchers may also want to continue to use long, single–stranded oligos and PCR based mutagenesis if they have experience with this approach. The labs that this applies to understand long PCR parameters and reagents and generally have a good understanding of critical design parameters for oligos used in mutagenesis. Though, these labs may also want to look at the cost benefits of dsDNA for longer sequence changes, even when the procedure is feasible with long oligos.

Cost is often the first consideration when designing mutagenesis experiments. However, it can be difficult to determine the real expense until after completing construct assembly and verification. Up front, it is easy to calculate the costs of oligos, dsDNA, and enzyme kits. The costs of time spent and repeating failed procedures cannot be determined at the outset, and should be controlled as much as possible by good planning and assessment of available expert advice. IDT has a skilled technical support team that can quickly assist you with many aspects of mutagenesis and gene assembly, available via the IDT Help Request Form.

IDT provides both high quality custom oligonucleotides and dsDNA (gBlocks) fragments to facilitate these methods. We have also written extensively on the topic of in vitro mutagenesis. The Additional resources section at the top right lists a selection of our DECODED newsletter articles on this topic.