What is Next Generation Sequencing?

Next generation sequencing (NGS), or massively parallel high-throughput sequencing, enables sequence profiling of everything from genomes and transcriptomes to DNA-protein interactions. As an integral part of genomic research NGS is now redefining several additional areas of scientific research—from biology to agriculture, to environmental research. 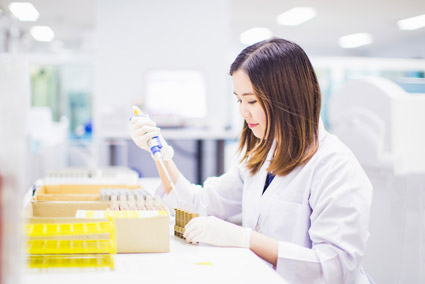 What is Next Generation Sequencing?

Next-generation sequencing, also known as massively parallel sequencing, is a high-throughput, rapid, and scalable sequencing alternative to first generation Sanger sequencing. With NGS, researchers can sequence millions of DNA fragments from hundreds of samples all on a single sequencing run, making NGS a fast, cost-effective method for genomic research.

NGS starts with genetic material—either DNA or RNA—extracted from cells or tissue. Then, a sequencing “library” is created by fragmenting the DNA (either sample DNA or cDNA created from RNA) into relatively short (100–300 bp) segments. Adapters are ligated to the DNA in a process called sample indexing that finishes the library and ensures it can be successfully sequenced by the chosen platform. The fragments contain sample barcodes (or indexes) to allow for multiple samples to be sequenced on the same run (sample multiplexing).

If there are specific regions of interest in the genome such as marker genes, or gene variants, these can be enriched by hybridization capture or amplicon sequencing. Target enrichment focuses sequencing to specific targets of interest.

The library molecules are then sequenced, and the sequencing data—called reads—are pieced back together like a jigsaw puzzle to elucidate the genomic sequence.

This detailed overview walks you through major advances in sequencing technology, types of next generation sequencing, their applications and more.

NGS has several advantages over other common technologies, including Sanger sequencing, qPCR, and microarrays. The speed and scalability of NGS generally make it an attractive and feasible alternative. Key benefits of NGS over other technologies are compared next.

Sanger sequencing, also known as capillary electrophoresis sequencing, is a highly accurate (0.001% error rate), fast and cost-effective sequencing method [1]. However, Sanger sequencing does have the limitation of sequencing only one DNA fragment at a time whereas NGS can sequence millions of individual fragments in a single reaction. And, when used with nucleotide “barcodes,” multiple samples can be decoded in a single NGS sequencing run [1]. Combined with its ability to detect a greater variety of nucleotide changes, and a lower limit of detection, NGS has become more accessible and practical for research labs interested in these objectives [1]:

qPCR is a commonly used technology for analyzing or detecting genomic variants, as well as for analyzing gene expression and RNA transcripts. Although qPCR is an accurate and reliable approach, there are two major advantages to using NGS instead to identify variants or study RNA transcripts. However, there are key differences that must be considered when deciding between NGS vs qPCR:

Microarrays are a powerful tool for gene expression studies but consider NGS for sequencing the transcriptome (RNA-seq), due to these inherent advantages over microarrays:

*RUO—For research use only. Not for use in diagnostic procedures. Unless otherwise agreed to in writing, IDT does not intend for these products to be used in clinical applications and does not warrant their fitness or suitability for any clinical diagnostic use. Purchaser is solely responsible for all decisions regarding the use of these products and any associated regulatory or legal obligations.