Researchers can study lncRNA function by suppressing expression and observing resulting phenotypes—a technique known as lncRNA knockdown. The 2 main approaches to experimentally achieve this are by using antisense oligonucleotides (ASOs) and RNA interference (RNAi). (See the article, A new renaissance for antisense in the era of lncRNA, for further discussion.) Knockdown with these reagents is not always easy, however, as there are many factors that can lead to incorrect or uninterpretable results.

IDT scientist Kim Lennox specializes in developing tools for gene and RNA regulation. She has several publications in these fields [2–4], and she has also presented a webinar entitled, Knockdown of lncRNAs: exploring RNAi and antisense oligo methods. Here, Kim provides some tips for successful lncRNA knockdown.

Directing well-designed reagents to the most effective target region is crucial for achieving successful knockdown. Here are the most important considerations.

Screen for effective ASO targets sites. Some regions of the lncRNA sequence are better ASO target sites than others. Identifying the most potent target sites for ASOs can be a challenge because there are currently no predictive algorithms for determining target accessibility. Using a software package such as UNAFold (IDT), however, can help predict lncRNA secondary structure. The ASOs designed by IDT are typically 20mer oligonucleotides with 40–60% GC content and are designed to have minimal secondary structure and self-dimerization potential. (To check secondary structure over a longer region of the target sequence, contact Rensselaer Polytechnic Institute, for a larger, licensed version of the UNAFold software.)

It is also important to verify that the ASO does not inadvertently target another closely related RNA sequence—target sites with >80% sequence identity with other RNAs should be excluded. 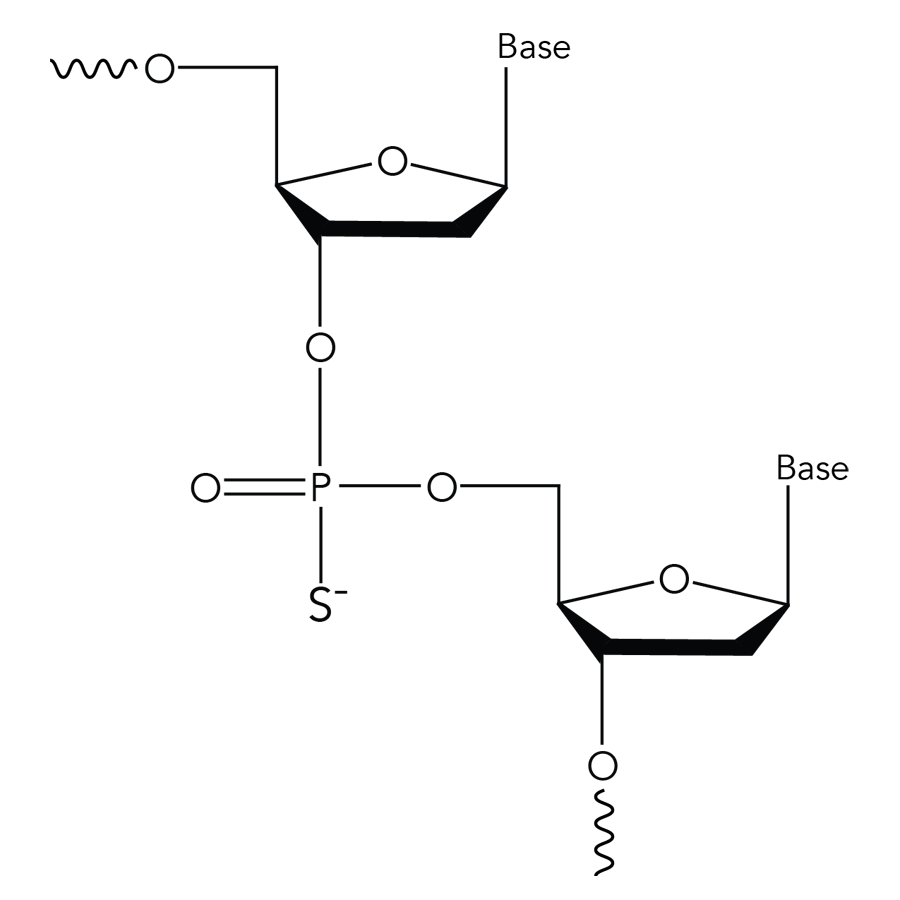 After an accessible site is found, 2′-O-methyl RNA can be added to the PS-modified DNA ASO to form a chimeric 2′OMe-PS gapmer (Figure 2). The addition of 2′-O-methyl RNA reduces ASO toxicity and increases Tm—which increases ASO potency. IDT is currently developing algorithms for improved site prediction to drive an online tool for designing ASOs.

Consider lncRNA secondary structure. The structure of the target can have a large impact on the efficiency of a knockdown reagent. When using RNAi, helicase activity in RISC is thought to unwind the target sequence, which greatly increases accessibility of the target. ASOs, on the other hand, rely exclusively on thermodynamics for target site binding, and it is difficult to computationally predict their ability to invade a sequence which is highly structured. Having said that, UNAFold software from IDT can be used to search for accessible target regions prior to ASO design, and this can improve efficiency.

Choose an effective lncRNA target length. Cleaved mRNAs that are translated into truncated, non-functional proteins will show accurate phenotypic changes, even if the RNA is not entirely degraded by ribonucleases. However, lncRNAs do not encode proteins, and may retain their function in the cell after cleavage, if active fragments remain. Therefore, lncRNA length can impact effective knockdown. The incidence of remaining active lncRNA fragments may increase with lncRNA protein binding, binding to other nucleic acids, or if the lncRNA has a complex structure, as these interactions can hinder the ability of ribonucleases to degrade the RNA. Unlike mRNAs, retaining a functional lncRNA domain can lead to erroneous phenotypes when examining knockdown.

We have worked with lncRNAs up to 10 kb in length, and have not observed retained functional lncRNA fragments. That said, the possible retention of functional fragments is an important consideration for all targeted lncRNA regions. This problem might not be entirely length dependent since protein binding, secondary structure, and even cell type can all be contributory factors. To determine whether there is complete degradation of the lncRNA, measure lncRNA knockdown by using at least 2 qPCR assays targeting opposite ends of the lncRNA sequence. If retained fragments are detected, it might be necessary to use multiple knockdown reagents distributed throughout the lncRNA sequence.

Work around lncRNA splice regions. Most lncRNAs are spliced, which can further complicate target region identification. It is important to target the correct isoform(s), and the use of multiple isoform specific qPCR assays can be helpful in doing this. For example, if targeting one isoform, design a qPCR assay that only amplifies that isoform. Further confirmation can be provided by designing a negative control qPCR assay that amplifies an isoform not intended for knockdown, to show that knockdown of that isoform did not occur. To knockdown multiple isoforms, design a qPCR assay that amplifies all (and only) the isoforms you are interested in. Though there are discrepancies in lncRNA annotation, advances in transcriptomics and high-throughput sequencing are facilitating the fast accumulation of lncRNA data sets, which are being collected and organized into large databases such as Ensembl, lncRNome, and LNCipedia [5].

Effective delivery of knockdown reagents into the cell is extremely important, but is often challenging. Below are tips to help ensure successful reagent delivery.

Choose reagents appropriate for your cell line. For cell culture, transfection efficiency is cell line specific. ASO delivery using Lipofectamine® 2000 Reagent (ThermoFisher Scientific) has been shown to work exceptionally well in several common laboratory cell lines [2, 6]. However, ASO reagents can be toxic to cells, especially at doses >20 nM. If toxicity is found to be an issue, Lipofectamine RNAiMAX Reagent (ThermoFisher Scientific) can be used as an alternative. Although RNAiMAX is an RNAi reagent, it is less toxic and has been seen to perform equally well with ASOs and siRNAs.

IDT scientists can provide reagent recommendations for a variety of cell lines. In some cases, particularly when using primary cells, electroporation can provide the best results. It is always important to include a positive control ASO to verify transfection efficiency, especially when working with new cell lines or new chemical classes of nucleic acids. For example, the optimum transfection method varies not only between cell types but also for plasmids, single-stranded ASOs, and double-stranded siRNAs.

Include a delivery reagent for in vivo injection. When performing lncRNA knockdown in vivo, we do not recommend using naked IV injection. It is more effective to use a delivery tool, such as a lipid nanoparticle or polymer system.

Following successful design and delivery of reagents, it is essential to measure lncRNA knockdown accurately. Consider these tips for analyzing knockdown data.

Design efficient qPCR assays. Rather than designing an RT-qPCR reaction for every binding site on every target, we recommend designing 2 qPCR assays, one each at the 5′ and 3′ ends of the target sequence. If, after amplification, you find the same change in expression level with the 5′ and 3′ end assays, you can assume that all fragments in between the ends have undergone the same change in expression (Figure 3). This experimental design saves time and money; it also eliminates data misinterpretations caused by erroneous amplifications from retained fragments (see discussion above, under Choose an effective lncRNA target length).

Figure 3. qPCR measures lncRNA knockdown. RNAi reagents or ASOs were transfected into HeLa cells at 2 concentrations—1 or 10 nM—using Lipofectamine® 2000 (ThermoFisher Scientific). The RNA was collected 24 hr after transfection, quantified with 2 triplicate qPCRs (one towards the 5′ end and one towards the 3′ end of each target sequence), and normalized against a control (HPRT expression levels). The data shows that in this case, RNAi reagents were more effective than ASOs at knocking down DANCR, a cytoplasmic lncRNA.

For lncRNAs that are not found in the PrimeTime® Predesigned qPCR Assay Database, we recommend using our PrimerQuest® Tool to design qPCR assays. When using an assay design tool, it is important to perform a BLAST search with the suggested primers and probes to verify specificity. Also select primers that have a lower tendency to form primer-dimers. Contact our application support team for assistance, if necessary.

Understand knockdown duration factors. ASOs that are chemically modified to incorporate a phosphothioroate backbone are extremely stable to degradation by serum and intracellular nucleases. Similarly, RNAi reagents are resistant to intracellular nucleases due to their association with RISC. However, ASOs and siRNAs are diluted with every cell division. Therefore, we can assume the duration of lncRNA knockdown is dependent on the rate of cell division. Whereas knockdown will be long-lasting in non-dividing cells, ASO/siRNA concentration will be diluted with each division in rapidly diving cells, leading to a shorter knockdown duration. More studies are needed, but using HeLa cells—which divide rapidly—we have achieved knockdown of mRNAs for >72 hours with ASOs, and up to 5 days with RNAi.

Use of CRISPR/Cas9 system to knockdown lncRNA

Whereas the CRISPR/Cas9 system will fully disrupt the open-reading of protein-coding genes, its use for lncRNA knockdown requires additional considerations. lncRNAs do not have an open reading frame and may retain function even in the event of a small deletion or insertion. Introducing large genome deletions via CRISPR/Cas9 is feasible, and has been done using a dual guide RNA strategy [7]. Additionally, the CRISPR/Cas9 system can introduce RNA destabilizing elements into a lncRNA, such as poly(A) signals, miRNA binding sites, RNase P substrates, or self-cleaving ribozymes [8].

Kim Lennox has been a research scientist at IDT for 13 years. Her most recent work has shown that effective lncRNA knockdown with antisense and RNAi reagents depends on the localization of the lncRNA in the cell. Her research has also demonstrated how to achieve successful lncRNA knockdown by combining RNAi and ASO reagents.

Your DNA or RNA sequence, desalted, deprotected, up to 1 µmol in tubes or plates. Verified by mass spectrometry.

No end to the modifications available. Shipped dried, hydrated, or annealed.

Indispensable for linking an oligo to another molecule, providing resistance to nuclease degradation, and more.

Guaranteed >70% knockdown by 2 of the 3 DsiRNAs in the TriFECTa kit. Controls provided.