Research profile: Read about how gBlocks Gene Fragments facilitated the College of William & Mary’s iGEM project on promoter stochasticity (“noise”), which won the Grand Prize at the 2015 iGEM Giant Jamboree. 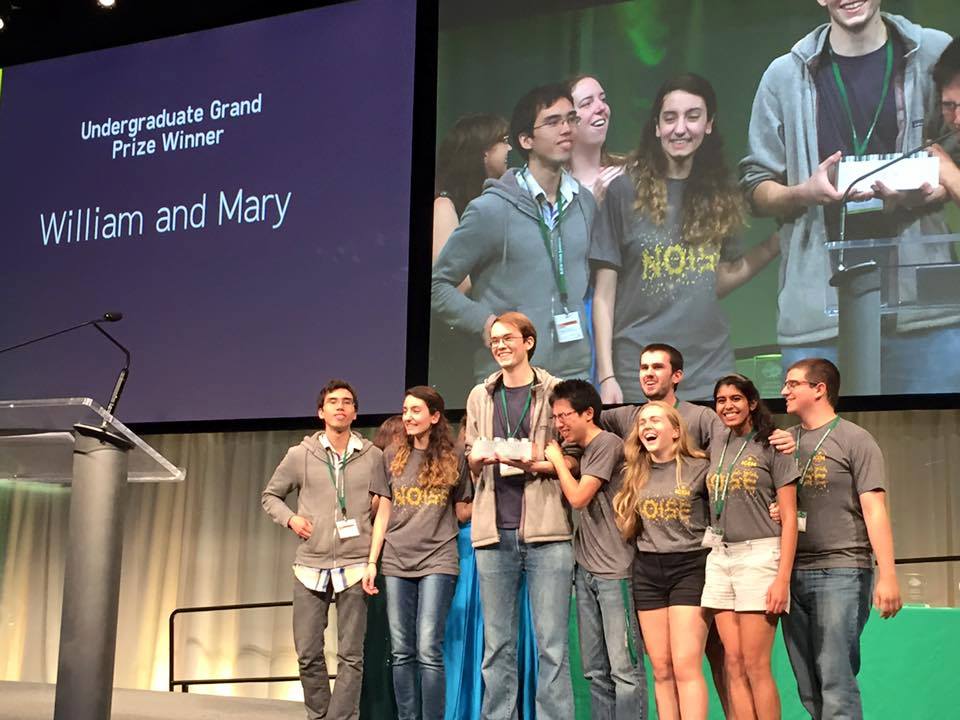 With 8 members and only one previous iGEM appearance, the College of William & Mary’s undergraduate team was relatively understaffed and inexperienced at the 2015 Giant Jamboree. In fact, many of the 250+ teams in the competition had never heard of the Virginia-based school, and when less than 50 people attended their initial presentation the team certainly felt like underdogs. Yet as the 5-day competition in Boston came to a close, Team William & Mary walked away with 4 first-place honors, including the Grand Prize.

The 2015 iGEM team, led by senior Andy Halleran and junior Caroline Golino, was an impressive interdisciplinary mix of students, whose range of study included biology, chemistry, mathematics, computer science, and neuroscience. Once selected, the 8 students began brainstorming project ideas, which is not always easy for such a diverse group. However after weeks of reading literature and crossing ideas off the chalkboard, the group agreed on a topic that was not only relevant, but also took advantage of their interdisciplinary skillsets.

Stochasticity, otherwise known as noise, can be thought of as the amount of variation that occurs within a system. In dynamic biological processes such as gene expression, noise is inevitable; however, it is common for some transcriptional processes to be more “noisy” than others. For their iGEM project, the William & Mary team characterized promoter-driven transcriptional noise in E. coli. Halleran explained, “There has been a surge in variability studies involving natural gene expression in eukaryotes, but less is known about expression variability as it pertains to synthetic biology. Specifically, very little had been published about the level of variation that exists for the most commonly used promoters in synthetic biology. We thought this should be very important information for anyone building gene circuits and gene networks that actually work.”

To determine the noise level of common promoters, the students expanded on research done by Michael Elowitz and colleagues in 2002. Elowitz et al. defined noise as having both intrinsic and extrinsic components, and he evaluated these using a dual-reporter fluorescent system [1,2]. In this model, 2 constructs are created with identical promoters, which each drives the expression of a distinct fluorescent protein—one construct includes Yellow Fluorescent Protein (YFP) and the other uses Cyan Fluorescent Protein (CFP). Researchers can use this system to differentiate between a promoter’s extrinsic factors, which should affect both constructs equally, and intrinsic factors, which lead to a difference in the ratio of YFP:CFP expression.

The William & Mary iGEM team applied Elowitz’s promoter evaluation method to the 3 most frequently used promoters in the iGEM BioBrick registry—the collection of genetic parts used by iGEM teams to build synthetic biology systems. These are the lacI-repressed promoter (pLac), the lacI-repressed lambda pL hybrid promoter (PLlac01 Hybrid), and the lambda cI-repressed promoter (cI repressible). To accurately measure promoter noise, the students needed to ensure that cells only contained one copy of each promoter. To control this, they integrated their dual-fluorescent constructs into the E. coli genome using gBlocks Gene Fragments and the Gibson Assembly® method. They also fused an antibiotic to the construct, so that they could select for the cells that underwent successful integration. The resulting noise levels for the 3 promoters are shown in Figure 1. 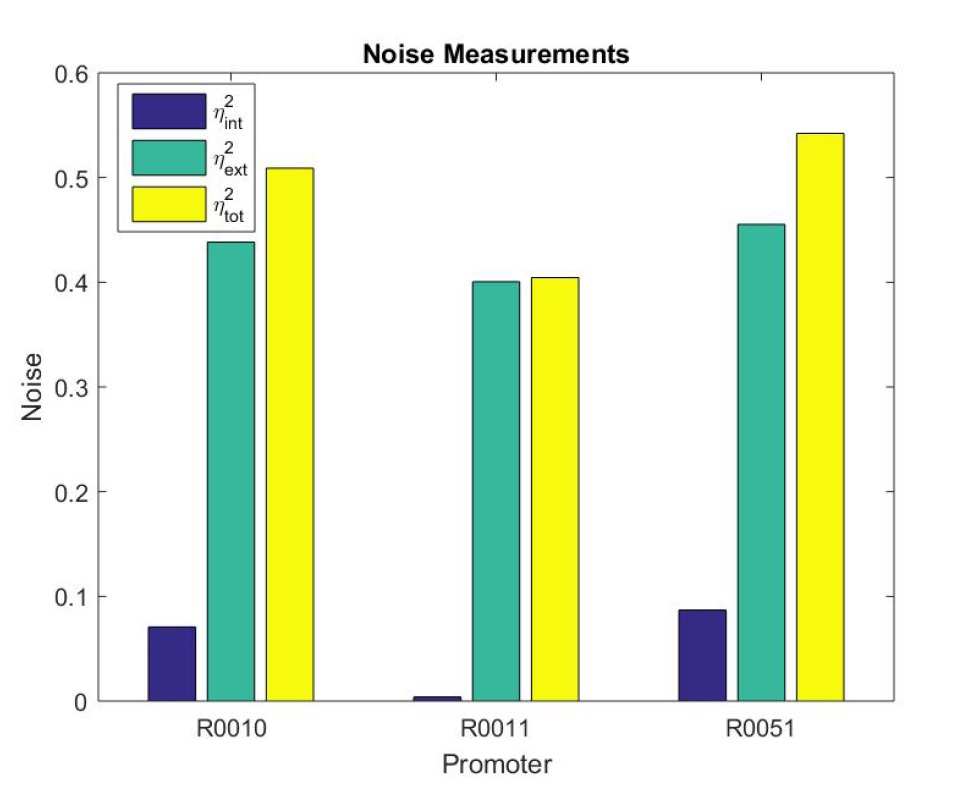 The BioBrick registry characterizes these promoters as if they all function similarly; however, the team’s data suggested otherwise. Their project demonstrated that promoter R0011, the lacI-repressed lambda pL Hybrid promoter, possesses significantly less intrinsic noise than the others. This finding was not only encouraging for the William & Mary students, but it will also help iGEM teams select promoters for their projects in the future.

In addition to characterizing noise variability in common promoters, the team also introduced new tools for manipulating promoter expression using a CRISPR/Cas9 approach. Due to new advances in Cas9 technology, one can now remove Cas9 catalytic nuclease activity while keeping DNA-binding properties intact. Such a Cas9 variant, known as dCas9, has led to the emergence of novel methods for controlling gene expression [3]. The William & Mary students built a codon-optimized dCas9 that, when used with an appropriate guide RNA (gRNA), reduced observed gene expression by 97% in E. coli. In this “side project”, which the team admits was a substantial amount of work, they created 12 gRNAs that targeted promoters commonly used for iGEM. Halleran notes, “These experiments really meshed with the whole idea of our project. Going forward, if we want to build larger, more complex, more sophisticated regulatory networks, we don’t just need information about underlying variabilities. We also need the tools to implement these networks. With the parts we built, someone can now repress a promoter that would normally not be repressible.”

IDT’s special offer of 20 kb of free gBlocks Gene Fragments (available to all iGEM teams), along with numerous custom primers, proved invaluable to the William & Mary team’s success at iGEM. They used the offer in its entirety and noted that the dCas9 side project would not have been possible without it. The group is extremely proud of their work, and they should be. The 2015 Giant Jamboree showcased some of the most sophisticated synthetic biology projects in the world. But few teams were as thorough, thoughtful, and impactful as the William & Mary team. As iGEM judge Markus Gershater says, “This was a piece of work that will likely be a foundation of how iGEM teams characterize and use these parts in the future, leading to much more robust and reliable biological designs [4]."

In addition to winning the Grand Prize, the team received first-place honors for Best Measurement Project, Best Education and Public Engagement, and Best Presentation. Read more about their project here.

Ordering your cloned sequences as synthetic gene products and save valuable time and resources.

Sequence-verified for use in CRISPR applications (HDR) and in vitro transcription.